Event recording for Comics Out Loud #3

HomeEvent recording for Comics Out Loud #3 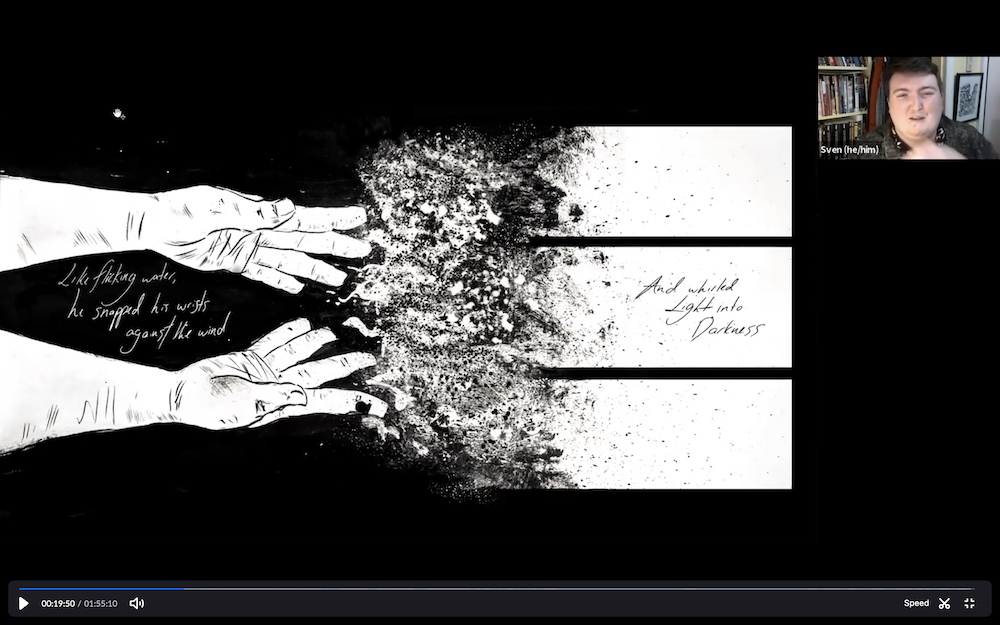 For those who weren’t able to make it to our third Comics Out Loud event, the recording of last Friday’s event is now up on our YouTube with captions added:

On Friday March 12, 7PM EST, Canada Comics Open Library (CCOL) hosted our 3rd Comics Out Loud with artists Sven, Rachel Evangeline Chiong, Vincy Lim, and Rabeea Syed!
Please note the content warnings before each reading.
Artist bios:
Sven (he/him) “is a cartoonist and illustrator, living and working in Toronto. His work includes the comics Starbound (2018), Dark Magic (2020, with Rachel Evangeline Chiong), and the forthcoming Words Plural #1 (expected 2021), as well as illustrations published in The Varsity, Acta Victoriana, and The Spectatorial. Despite typically being drawn in stark black and white, his art deals with the rich greys and glorious technicolour of loss, longing, redemption, hope, and wonder, in his dogged pursuit of expressing the beautiful mystery that he knows neither words nor pictures will ever really describe. He’s also taller in person.”
Rachel Evangeline Chiong (she/her) “is in the habit of saying “yes” to things for the past six years. On paper, she is a music and culture journalist for publications such as Exclaim! (@exclaimdotca) and A.side (@a.side). She has won the Norma Epstein Foundation Award (‘18) in poetry and published her short story as the national winner of the Young Writers of Canada Manuscript Contest (‘13). As a spoken word performer, she gigs with her partner in the duo Konstangeline (@konstangeline) and has facilitated workshops with the Toronto Public Library and The Kapisanan (@kapisanan). She is a member of the Pluma Collective (@plumawrites) , a group of Filipinx-Canadian writers in Toronto whose work spans genres and generations. Most recently, she has begun hosting the writing podcast “Rough Draft”, where she and her co-host, Sarim (@miras_nafri), disagree on just about everything.”
Vincy Lim (they/them) “is a Chinese-Canadian non-binary sapphic illustrator and cartoonist whose work revolves around the themes of self-love, queerness, disability, and abuse. Through graphic memoirs and fictional stories grounded in the realities of today’s marginalized groups, Vincy produces works that emphasize on loving yourself, healing, and the recovery process. As a recent escaper of abuse and attempted murder, Vincy wishes to highlight the ability to move onwards and feel content with one’s life despite their past or current situations. Vincy strives to create comics that speak on behalf of those who cannot, that tell the stories of those who live in hiding and in fear, and let them know that there is hope and happiness at the end of it all.”
Rabeea Syed (she/her): “I’m Rabeea Syed, a Pakistani Canadian graphic designer, zinester, and arts educator. I love self publishing zines and facilitating Zine Making workshops. I make zines and sequential art about my personal experiences as a visible Muslim WOC living in Toronto. My instagram is @rabeeasyed.”
Artists read from a selection of works including:
Dark Magic by Rachel Evangeline Chiong and Sven: “Comics adaptation of Rachel’s poem, ‘Dark Magic.’ Many creation stories begin when light brings life to a sea of darkness. But what if it was in reverse?”
When She Set Fire to My Friends’ Houses by Vincy Lim: “Growing up disabled isn’t easy – much less when severe abuse seeps under the surface of everyday life. Shedding light on physical, sexual, and emotional abuse alongside with being a survivor of child sex trafficking, “When She Set Fire to my Friends’ Houses” is a story of survival and recovery during and after abuse, and the hope that there’s a life worth living despite all circumstances. When the odds are against you; when the police don’t believe you and laugh in your face; when authorities tell you to give up and remain under abuse so at least you can have a roof over your head instead of facing homelessness on the streets, and managing to pull through to escape and thrive regardless. Knowing that you’re worth more than the life you’ve been given and making a name for yourself, even if it’s reclaiming the name you’ve been born with.”
Rabeea Syed read from a selection of zines including “Enough” – a zine about living with anxiety, and “Hato“.
Artist websites and social media:
Rachel Evangeline Chiong: rachelevanchiong.com, @rachelsauruscrankthatfocus on Instagram
Sven: svencomics.ca, @svencomicsart on Instagram
Vincy Lim: vincylim.ca, @kiwimii on Instagram
Rabeea Syed: @rabeeasyed on Instagram
Comics Out Loud is a series of comics read-out-loud events prioritizing creators of marginalized genders and BIPOC creators. It is our hope that this and similar projects can also connect blind and visually impaired comics readers with comics and community.
Applications are closed for this year but you can read more about the project here:
https://www.canadacomicsol.org/get-involved/comics-out-loud-2020-2021/​
Comics Out Loud is supported by a grant from the Ontario Arts Council.
Please follow and like us: